A cat lady's thoughts on food, fitness, fashion and fun.

Tying the Knot: The Proposal

There are so many exciting wedding posts I would like to do, but I think it makes sense to start at the beginning and discuss the proposal.

Several months ago, toward the end of July, Ryan asked me if I would like to go look at rings with him. I was super excited that he seemed to finally be taking seriously my not so subtle hints that I was ready to “take the next step”. We have been together almost 4 years, live together 3 of those, bought a house together…you get the idea. We had all the elements of commitment to one another, just not the ring.

So we went to a local jewelry store, and I looked at a number of rings. I didn’t know what I wanted excepts I liked wider bands and either round or princess cut stones. I described this to the sales lady and gave her an idea of budget. She picked up this ring with 10 round channel cut stones in the band and a center stone that was 4 princess cut diamonds put together. The band was gorgeous, but I don’t like the small stones put together, and wanted just one center stone. I tried several other rings on, but the first kept capturing my eye. I kept seeing it on my finger, if only it had a different center stone.

The sales person could tell it was the one I truly loved, so she brought out 2 stones, a princess and round stone to replace the 4 small diamond in the center. As soon as she held the round stone up and showed me what it would look like, I was sold. I could only hope Ryan was as well. They asked me to go wait on the other side of the store so Ryan could do some negotiating. I proceeded to text all my close friends that OMG we were RING shopping!!!!!!!!!!!!!!!!!!!!!! As Ryan came back over to where I was, the sales person sized my finger and told Ryan he could pick up the new ring with the center stone I picked, and sized for my finger tomorrow. At that point, the cat was out of the bag and I knew he had bought me a ring.

Now, I am not exactly known for my patient nature, and that following week was one of the longest waits of my life. I knew he had a ring, just didn’t know when the proposal would come. It was extra hard to wait since I was on summer break, and had little to do with my time. I thought surely I would be able to see the proposal coming when he finally did, because Ryan usually can’t keep a secret. I also assumed it would be on the weekend so he could do something special and not just a boring weeknight.

Friday comes around, and Ryan and my brother made plans for us to see The Dark Knight Rises. I was disappointed because, although I wanted to see the movie, I was hoping for a proposal to start the weekend, and was losing my patience waiting. A part of me was still hoping it was a ruse, but when my brother called to confirm the time with me, I accepted there would be no life changing ringtasticness that evening. I decided to drown my boredom in episodes of The Real Housewives, and lounge around in my summer “uniform”- yoga pants and a tank top.

At some point during the day, Ryan sent me a picture of a kitten that they found near his work playing with a ball they had. It was absolutely adorable and I jokingly told him to bring it home. He called me later in the day and told me he had a surprise for me, but it wasn’t the surprise I’ve been waiting for so not to get my hopes up. I immediately thought he was bringing the kitten home. I got super excited and nervous all at once. We were in the process of moving into our new house, and were cat sitting for my mom while she was on vacation. This did not seem like the ideal time to take in a stray cat.

As soon as he got home, he walks in the door with a squeakily meowing sound coming from a small cat carrier. I could not believe he’d brought the kitten home! Immediately I got excited and was like oooooo I want to see it! As I walked closer though, I saw Ryan’s iPhone was in the cat carrier. I became suspicious and asked, “Why is your iPhone in the carrier?” I also wasn’t seeing the cat. Ryan bent down and said, “Here, let me show you.” As he bent down, he got on one knee, and it clicked what was happening. He pulled out the ring from the cat carrier and asked me to marry him. I was in shock and could not believe he had pulled one over on me and still completely took me by surprise, even though I knew the ring was coming. My first response was “You douche, you tricked me!”, followed by an immediate “YES!!”

I asked are we still seeing the batman movie, and thankfully was told no. Instead, Ryan surprised me with a night at the nicest hotel downtown, the Vinoy, and dinner at one of their restaurants. I was so excited to go celebrate our engagement. We quckly packed our bags and headed to the hotel, which was only about 15 mins away. I could not stop looking at my sparkly ring. I of course texted about everyone I knew, called my mom, called my grandma, posted to Facebook, all but shouting it from the rooftops.

At the hotel, we told them we got engaged and were upgraded to a room with a hot tub. My brother came to the hotel with a bottle of champagne to celebrate and the three of us enjoyed a glass together in the room. When Blake left, Ryan and I headed down to the health club at the hotel to say hi to some of Ryan’s former coworkers and share the news (he had worked there about a year before.) They were all very excited for us. After, we went to dinner. We each had a celebratory cocktail before dinner, one of my favorite little indulgences, and enjoyed a tasty meal together. At the end of dinner, the waited brought us complementary champagne and a chocolate dessert. It was so fun being treated with little extras and having others recognize what a special night it was for Ryan and I. 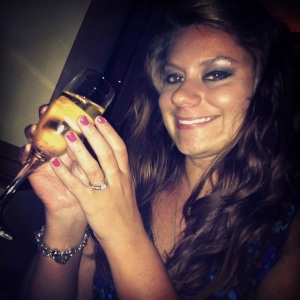 After dinner, we decided to go for a walk downtown to enjoy the summer evening and stop in at our favorite bar, The Ale and the Witch. We played Jenga, and enjoyed a craft beer together. After a while, be both were feeling tired and walked back to the hotel. Ryan’s friends in the health club had sent up amazing cupcakes as a congratulatory surprise. We took a dip in the hot tub before calling it bedtime.

He takes his Jenga VERY seriously.

The next morning, we decided to have brunch before heading home, and went to Ceviche’s which has become one of our favorite brunch spots since then. Ryan had french toast and I had a breakfast sandwich on a croissant. As a lover of all things brunch, it was the perfect end to a wonderful engagement celebration. I couldn’t wait to begin the wedding planning, but most of all, I was so excited to finally marry my best friend. ❤